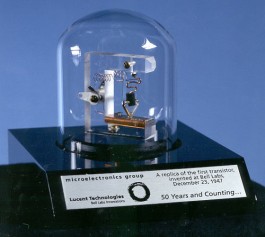 A replica of the first working transistor

Physicists John Bardeen, William B. Shockley, and Walter Brattain shared the 1956 Nobel Prize for jointly inventing the transistor, a solid-state device that could amplify electrical current. 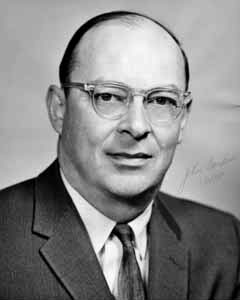 William Shockley spent New Year’s Eve alone in a hotel in Chicago. He was there for a Physical Society meeting, but he was most excited about having some time to himself to concentrate on his work. There may have been a party going on downstairs, but Shockley wanted nothing to do with it. He had more important things to think about. He spent that night and the next two days working on some of his ideas for a new transistor-one that would improve on Bardeen and Brattain’s ideas.

Scratching page after page into his notebook, one of Shockley’s ideas was to build a semiconductor "sandwich." Three layers of semiconductors all piled together, he thought, just might work like a vacuum tube-with the middle layer turning current on and off at will. After some 30 pages of notes, the concept hadn’t quite come together so Shockley set it aside to do other work.

The Idea Comes Together 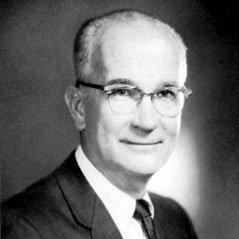 Shockley’s January was pretty dismal. He thought he should get sole credit for inventing the transistor — the initial research ideas, after all, had been his own. The Bell Labs attorneys didn’t agree. They refused to even put him on the patent. The only thing to do, Shockley decided, was to build a better mousetrap.

As the rest of the group worked merrily away on improving Brattain and Bardeen’s point-junction transistor. Shockley concentrated on his own ideas — never letting anyone else in the lab know what he was up to.

On January 23, unable to sleep, Shockley was sitting at the kitchen table bright and early in the morning. He suddenly had a revelation. Building on the “sandwich” device he’d come up with on New Year’s Eve, he thought he had an idea for an improved transistor. This would be three-layered sandwich. The outermost pieces would be semiconductors with too many electrons, while the bit in the middle would have too few electrons. The middle layer would act like a faucet — as the voltage on that part was adjusted up and down, it could turn current in the sandwich on and off at will.

Shockley told no one about his idea. The physics behind this amplifier was very different from Bardeen’s and Brattain’s, since it involved current flowing directly through the chunks of semiconductors, not along the surface. No one was sure if current even could flow right through a semiconductor and possibly Shockley wanted to test it before discussing it. Or possibly he felt that Bardeen and Brattain had “taken” ideas of his for the point-contact transistor and he didn’t want to risk that happening again. 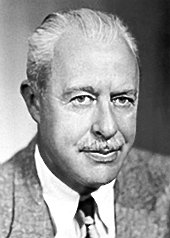 Then, on February 18, Shockley learned it could work. Two members of the group, Joseph Becker and John Shive, were working on a separate experiment. Their results could only be explained if the electrons did in fact travel right through the bulk of a semiconductor. When they presented their findings to the group, Shockley knew he had the proof he needed. He jumped up and for the first time shared his concept of a sandwich transistor to the rest of his team.

Bardeen and Brattain were stunned that they hadn’t been filled in before now. It was clear that Shockley had been keeping this secret for weeks. It added still more space to the ever-widening gap that was growing between them.

The transistor performed electronic functions similar to the vacuum tube in radio and television, but was far smaller and used much less energy. The transistor became the building block for all modern electronics and the foundation for microchip and computer technology.

Born in Madison, Wisconsin, Bardeen obtained his Ph.D. in 1936 in mathematics and physics from Princeton University. A staff member of the University of Minnesota, Minneapolis, from 1938 to 1941, he served as principal physicist at the U.S. Naval Ordinance Laboratory in Washington, D.C., during World War II, after which he joined Bell Telephone Laboratories, Inc. There he conducted research on the electron-conducting properties of semiconductors. This work led to the invention of the transistor. Bardeen is also responsible for a theory of superconductivity, the property of some metals to lose all electrical resistance at very low temperatures, and for a theory explaining certain properties of semiconductors. In 1977, Bardeen received the Presidential Medal of Freedom, the highest honor awarded to a civilian.

Shockley was born in London. He joined the technical staff of the Bell Telephone Laboratories in 1936 and there began experiments that led to the invention and development of the junction transistor. During World War II, he served as director of research for the Antisubmarine Warfare Operations Research Group of the U.S. Navy. After the war, he returned to Bell Telephone as director of transistor physics research. He was visiting professor of physics at the California Institute of Technology, Pasadena, in 1954, and deputy director of the Weapons Systems Evaluation Group of the Department of Defense in 1954-55. He joined Beckman Instruments Inc., to establish the Shockley Semiconductor Laboratory in 1955. In 1958 he became lecturer at Stanford University, California, and in 1963 became the first Poniatoff professor of engineering science at Stanford University.

Brattain was born in Amoy, China. Upon receiving his doctorate in 1929, he became a research physicist for Bell Telephone Laboratories. His chief field of research involved investigations into the surface properties of solids, particularly the atomic structure of a material at the surface, which usually differs from its atomic structure in the interior. He became adjunct professor at Whitman College, Walla Walla, Washington, in 1967. He was granted a number of patents and wrote extensively on solid state physics.