So you’re a Fortune 500 exec, looking to get your company in on the ground floor in the next great business boom. Hearkening back to that old real estate saw, you’re seeking your competitive advantage in “location, location, location.” And then it hits you: Mississippi.

As the Mississippi DECD can attest, we love a challenge. We were asked to convince the corporate jet set that Ole Miss was the place for any company that “needs it all” — communications and transportation infrastructure, relaxed regulatory requirements, affordable labor, low operating costs and cooperative public officers. Could they be sold on the notion that Mississippi was not only a cost-effective place to be, but that the DECD would do whatever it takes to make them happy?

Frankly, selling Mississippi to America’s corporate elite was a tall order. And the only way to live up to it was to stare it straight in the face. So for inspiration, we looked to the very tallest orders our American vernacular could provide. 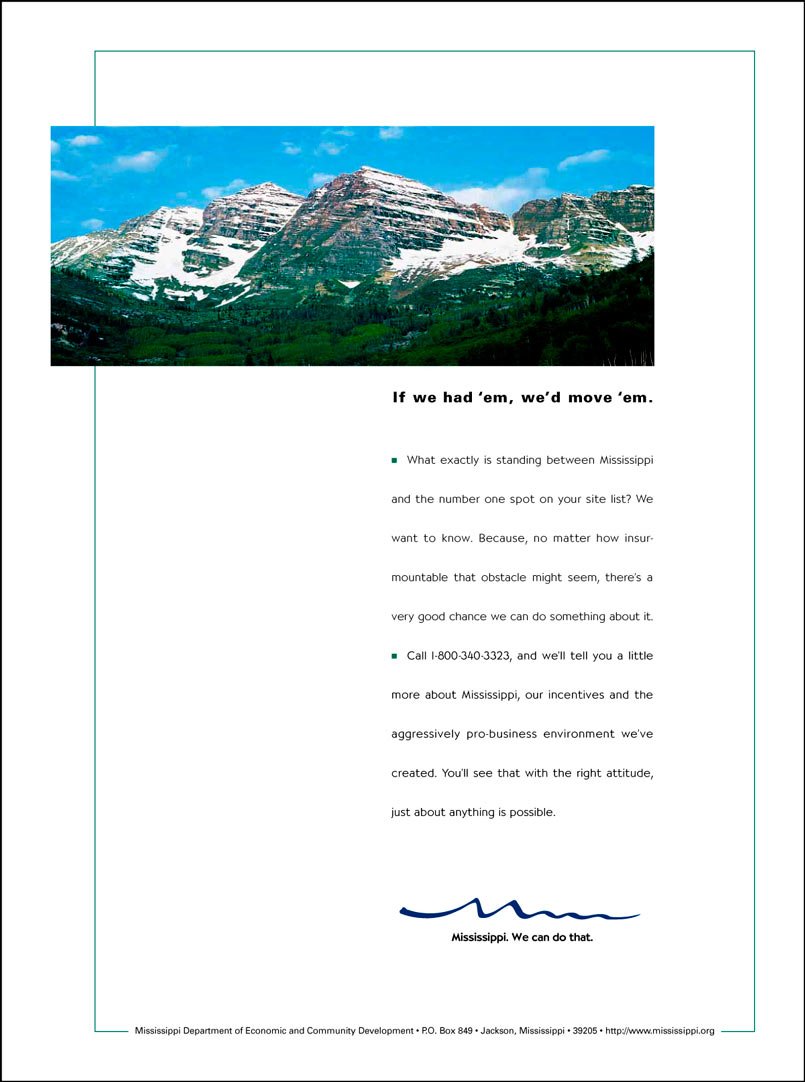 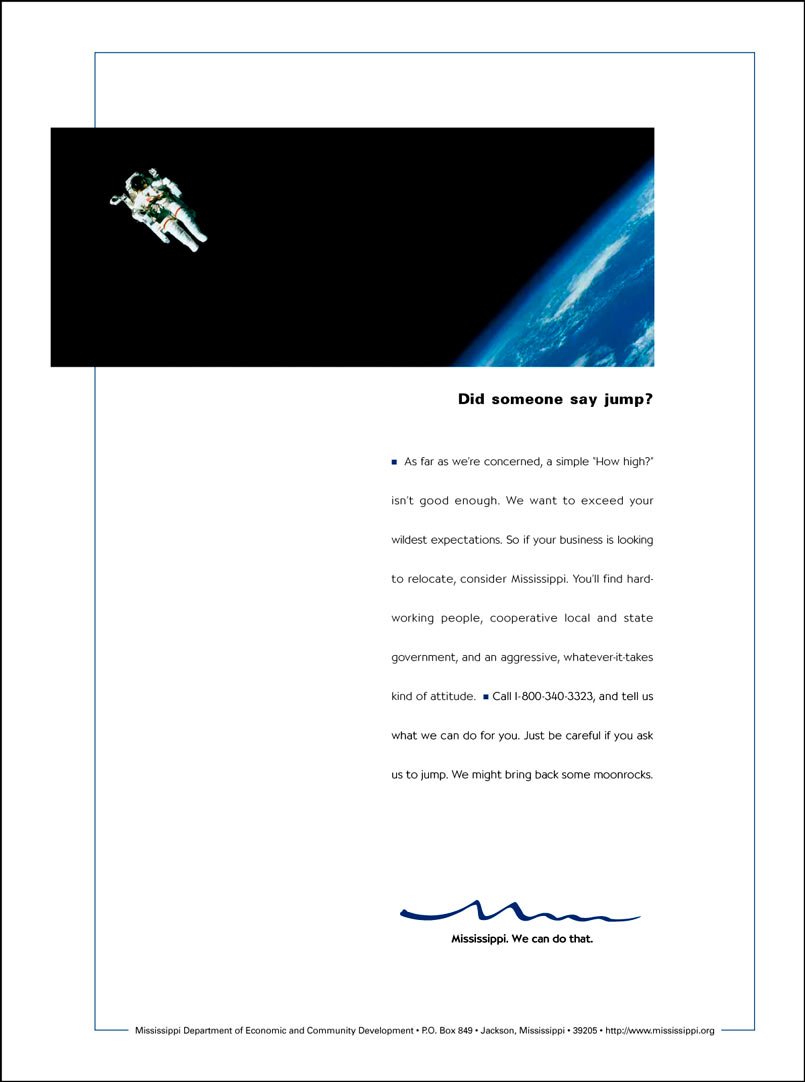 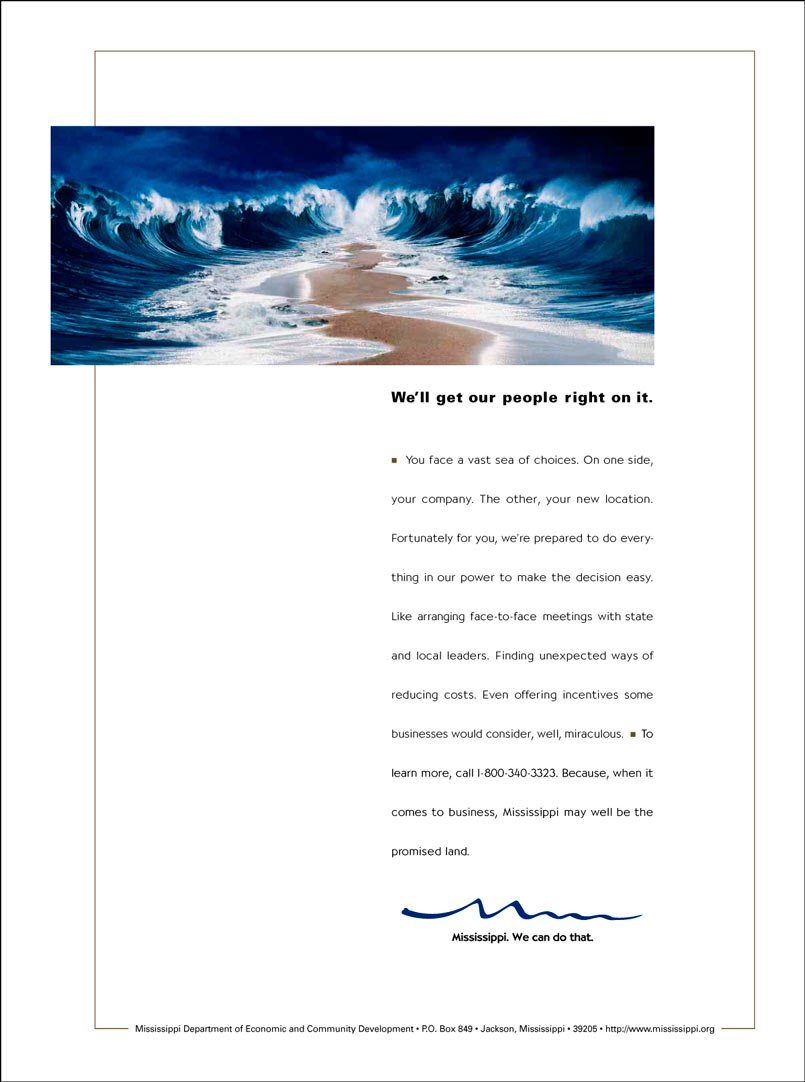 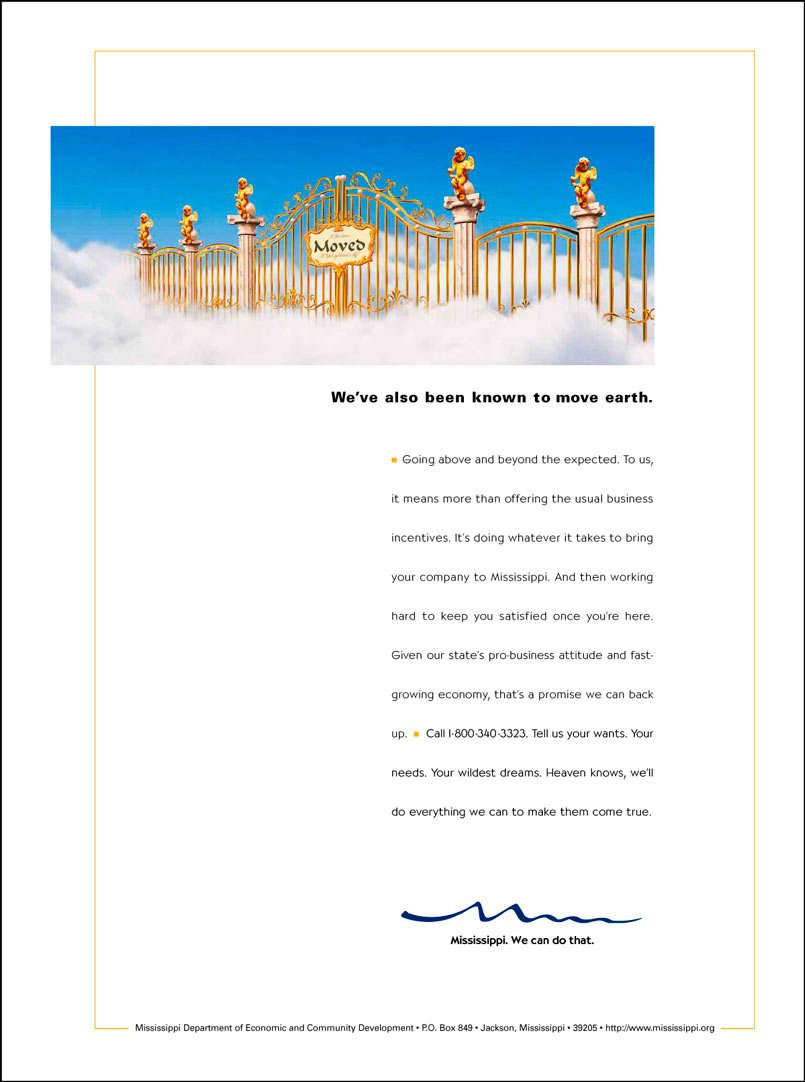 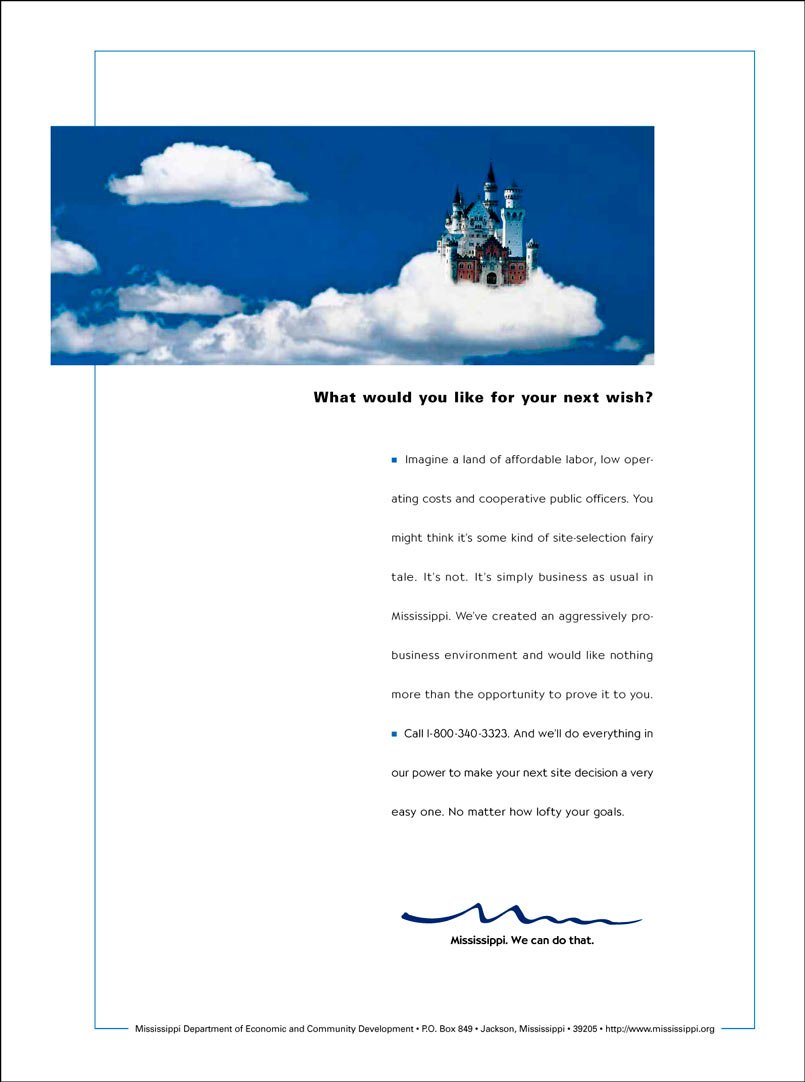 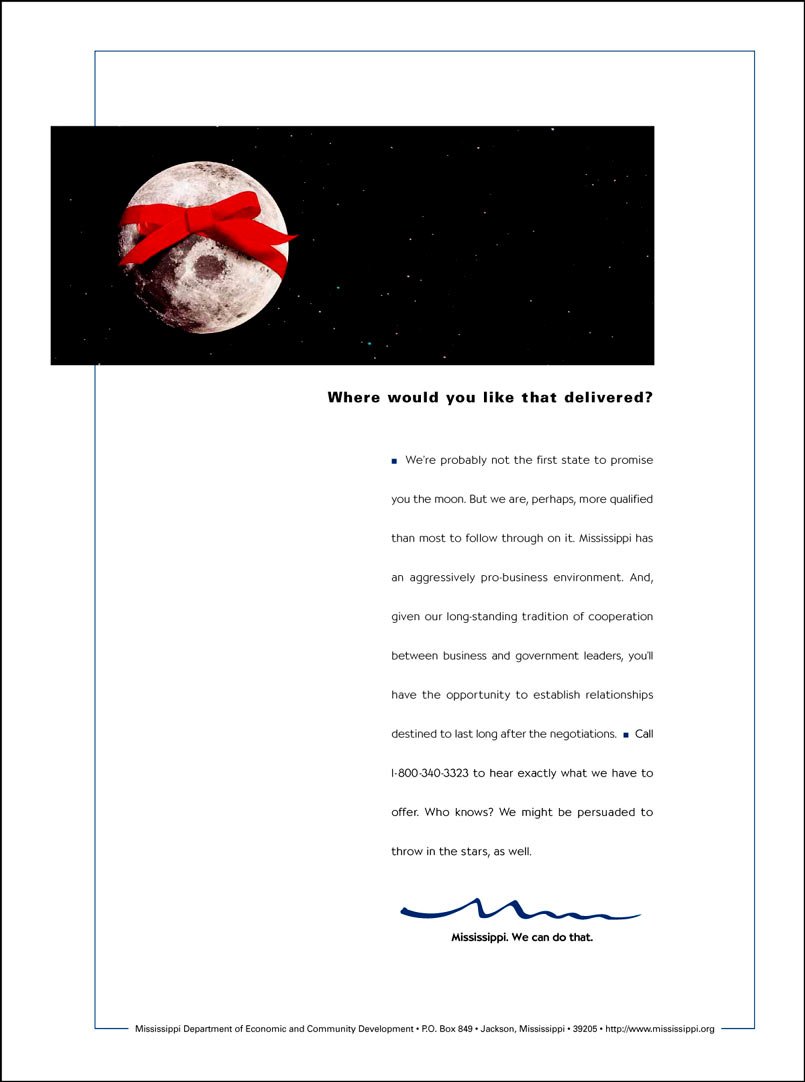 In contrast, creation of firms in U.S. dropped 7 percent in 1998 By Mark Watson, Clarion-Ledger Staff Writer

In 1998, Mississippi’s entrepreneurs led the nation in the rate at which they started new businesses and created jobs with those businesses, a Dun & Bradstreet report shows.

“It’s a good thing,” said George Carter, University of Southern Mississippi economics and international business professor. “You don’t see Mississippi first in many things. You usually think of California or other places as where all the freewheeling business activity is taking place. But the real freewheeling activity in 1998 was in Mississippi… It’s not often you see us in this kind of light.”

Mississippi leads the nation in business start-up growth and in jobs created from those start-ups.

Dal Didia, an assistant professor of economics at Jackson State University, struck a cautionary note, saying that the numbers might also show that relatively more Mississippians were sufficiently dissatisfied with their jobs to strike out on their own.

“I think this goes to the point that we’ve been trying to sell for some time, that the business climate in this state is as healthy as any place in the nation,” said Duane O’Neill, Metro-Jackson Chamber of Commerce president. “It takes awhile to get that word believed across the nation… but it’s definitely changing, and these numbers show …that people believe Mississippi is a new land of opportunity,”

Didia acknowledged that U.S. culture encourages entrepreneurship, which can result in job growth, but said business start-up growth “is not always a good thing.”

“When you are less secure with your job or not very happy with your pay, the economic impetus can be there for you to say, ‘What the heck? I’ll start my own business, and it might be better.’ ” He said.

Gerald Lee, economics professor at Mississippi College’s School of Business, said large corporations’ outsourcing of functions could be boosting these numbers, because those companies may re-hire their old workers as contractors or consultants.

But starting a new firm usually requires capital, which could not occur without confidence in success on the part of both the borrower and the lender, Carrer noted.

Business start-up statistics are important because they are “the other side” of the story about business failures which often capture the public’s attention, Carter said.

“We talk about job losses, but when you look at all of the changes, more jobs are created than are lost,” he said.

Fast-growing companies, such as Jackson-based MCI WorldCom, may also be acting as an “engine for growth” by creating a need for more service firms, he added.

“I think our Mississippi Department of Economic and Community Development has done a good job in helping small businesses with researching and marketing and helping them getting started,” Brister added.

Carter said, “People complain about all the paperwork and regulations we put on people starting small businesses, but relative to other countries, it’s not particularly onerous, and people do it all the time.”