Why Cross Posting Tweets to Facebook is a Bad Idea.

But before going any further, I know some will disagree and will want to use this new feature. So, for all of you, here’s a quick video on how you can connect your Twitter and Facebook accounts. 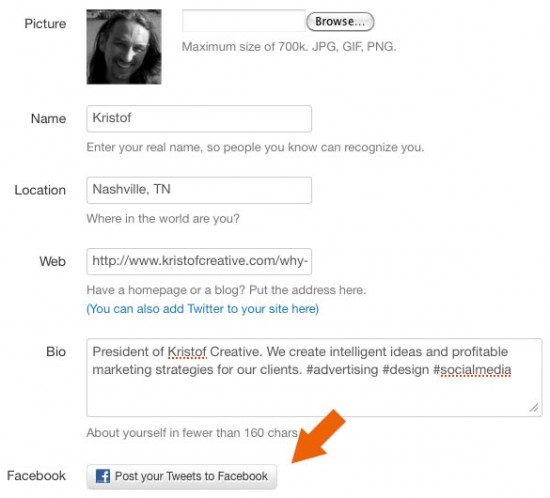 First and foremost, it’s important to understand that Twitter is not Facebook (and visa-versa). They’re different networks with different feature sets. One is not better than the other, they just serve their social communities differently.

Twitter’s 140 character limit means words have to be shortened in order to save space. Words like “about” become “abt”, “with” becomes “w/”, “have” becomes “hv” etc. And hashtags like #socialmedia — used on Twitter to make it easier for people to follow specific topics — don’t serve a function on Facebook.

So when Tweets are replicated on Facebook, it’s clearly apparent the message came from Twitter. So message comes across as sharing, but not caring enough to fully write it out or expand on what’s being said.

Another problem with the feature is that you can’t selectively choose which updates get posted to your Facebook account. It’s either ON or it’s OFF — nothing in between.

As an example, shortly after I made the above video, I was engaged in #blogchat (a Twitter chat about blogging). Unfortunately, I forgot to turn off the automatic Facebook update setting so every single one of my #blogchat tweets (and there were a lot) were sent to my Facebook account. All of my Facebook friends timeline were then filled with half conversations and replies to other Twitter users without any context of what I was talking about. Ouch!

It’s important to understand the nuances of each social network you use and, more importantly, how people are using them. If you can identify why people are using them and why they’re following and/or friending you, you’ll have a greater opportunity to have more meaningful engagement and growing your networks.

I’m sure this is a nice feature some people may like. I’m just not one of them.